Australia re-pivots to a core Indo-Pacific 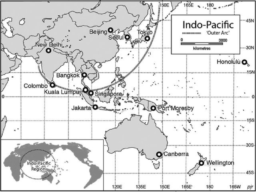 On the 1st of July 2020, Australia’s Prime Minister, Scott Morrison, explained “we need to prepare for a post-COVID world that is more dangerous, and that is more disorderly”, so consequently “today I’m launching the 2020 Defence Strategic Update. It represents a significant pivot”.

Morrison’s context was how “the Indo-Pacific is the epicentre of rising strategic competition”. The Indo-Pacific was “the focus of the dominant global contest of our age”. In addition, Morrison pinpointed further “tensions over territorial claims are rising across the Indo-Pacific region, as we have seen recently on the disputed border between India and China, and the South China Sea, and the East China Sea [between Japan and China]”. The common thread for this global contest (China-US), disputed Himalayan border (China-India), East China Sea (China-Japan) and South China Sea is the People’s Republic of China and its post Covid-19 push for greater presence and positioning.

Australia’s response is this “significant pivot”. On the one hand, Morrison noted “the objectives outlined in the 2016 Defence White Paper saw an equal weighting across the three areas of Australia and its northern approach, South-East Asia and the Pacific and operations in support of the rules-based global order”. On the other hand, he announced changes, “the Government has directed Defence to prioritise, to make choices”; with a subsequent “geographical focus on our immediate region, the area ranging from the north-east Indian Ocean through maritime and mainland South-East Asia to Papua New Guinea and the south-west Pacific”. Australia is now making strategic choices, shifting its priorities away from the Middle East and global issues; to what can be termed a “core” maritime Indo-Pacific, consisting of the East Indian Ocean, the South China Sea and the South-West Pacific Ocean.

What this represents by the current Liberal Party government, is a re-invocation of the “Indo-Pacific strategic arc”, first identified in Australia’s 2013 Defence White Paper published by the previous Labour Party government of Kevin Rudd. Curving from India through the South China Sea to Japan, this was a double-edged concept, China pushing out, but also China being constrained. Chinese denunciation of Morrison’s Strategic Defence Update was immediate, with state media Global Times headlines on the 2nd of July “China ‘prepared against military provocation from Australia’”.

David Scott (Dr) – is a prolific author on the Indo-Pacific, China and India; an associate member of the Corbett Centre for Maritime Policy Studies, and a member of the Center for International Maritime Security (CIMSEC).