The Maritime Silk Road and the India-USA alternatives 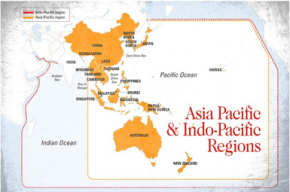 China’s Maritime Silk Road (MSR) continues to operate as Beijing’s flagship geo-economic initiative for the Indo-Pacific. In that vein, China’s 21st Century Maritime Silk Road Expo held in Fuzhou on the 18th of May 2019, followed the Belt and Road Forum (BRF) held in Beijing on the 25th of April. The BRF attracted widespread attendance from states across the Indo-Pacific, especially from Southeast Asia. However, significantly, neither India nor the USA attended the 2019 BRF. In contrast, Randall Schriver, Assistant Secretary of Defense for Indo-Pacific Security Affairs arrived in New Delhi for security talks on 25 April.

India boycotted the first Belt and Road Forum in 2017; irate that the China-Pakistan Economic Corridor, connecting the overland Eurasian “belt” and the maritime Indo-Pacific “road”, goes across Indian-claimed territory in Kashmir. India continues to see China’s MSR initiative as representing encirclement of India. Modi’s visits in June to Sri Lanka (which had also boycotted the 2019 BRF) and the Maldives pushed infrastructure cooperation, in effect reflecting wider India-China geo-economic competition in the Indo-Pacific region.

The United States attended the first BRF in 2017, albeit at a fairly junior level. Since then, US espousal of a Free and Open Indo-Pacific has brought increasing US denunciations of China’s Maritime Silk Road initiative. This was very evident at the Shangri-La Dialogue on the 1st of June of 2019, where Patrick Shanahan the acting Secretary of Defense profiled “a tool kit of coercion throughout the Indo-Pacific” that China used; in which the MSR was “engaging in predatory economics and debt for sovereignty deals, lubricated by corruption, which take advantage of pressing economic needs to structure unequal bargains” to China’s benefit. The US Indo-Pacific Strategy Report released on 1 June, blasted the “significant debt accumulation” faced by the Maldives, Bangladesh and Sri Lanka in their MSR infrastructure projects with China.

Faced with China’s MSR, the US and India are involved in alternative infrastructure initiatives in the Indo-Pacific. India and Japan have been pushing the Asia-Africa Growth Corridor since 2016. A significant joint India-Japan venture in Sri Lanka was announced in May 2019, costed at between $million 500–700, to develop Colombo port infrastructure. This would counter China’s position at nearby Hambantota port. In addition, the USA, Japan and Australia set up the Trilateral Partnership for Infrastructure Investment in the Indo-Pacific, with indications of substantive funding, in November 2018. US-India regional connectivity cooperation in the Indo-Pacific was signalled on the 29th of March 2019 with their Statement of Guiding Principles on Triangular Cooperation for Asia and Africa. With China in mind, India-US economic cooperation in the Indo-Pacific was high on the agenda for Secretary of State Mike Pompeo’s visit to India in June.