France and India push a new Indo-Pacific platform at Reunion 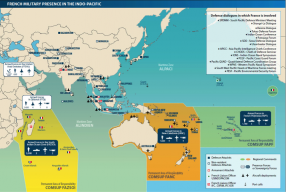 From 23-28 October 2019 France and India met in the French overseas department of Reunion to hold talks with officials from Comoros, Madagascar, Mauritius and the Seychelles, the Francophone island states in the Indian Ocean. The platform was subtitled “Unis dans l’espace Indo-Pacifique” (“United in the Indo-Pacific space”).

The meeting was significant in showing India’s increasing importance in the Indian Ocean (“India’s ocean”?), India’s growing security links with France, and India’s sustained Indo-Pacific strategic terms of reference. India’s Minister of State for External Affairs Vellamvelly Muraleedharan tweeted on the 23 October that he had spoken at the meeting about “India’s role in enhancing trade and regional integration in the Indo-Pacific” where “India is a force of good, peace, and engine of growth and prosperity in the Indo-Pacific”.

The meeting was also significant in showing France’s importance in the Indian Ocean, France’s growing security cooperation with India, and France’s sustained Indo-Pacific strategic terms of reference. President Macron’s address to the conference on 28 October drew out the importance of the Indo-Pacific; as “a region which, in all respects, is now of unprecedented strategic importance. The Indo-Pacific is the concept I deeply believe in”.

Politically, Macron was blunt that the purpose of the new format “is to fully recognize and anchor France in this Indo-Pacific space”; in which France was “a maritime and islands Indo-Pacific country” through possessions like Reunion, Kerguelen, New Caledonia and Polynesia and their associated Exclusive Economic Zone (EEZ) waters.

Geo-economically, Macron argued that “the Indo-Pacific is the epicentre of global maritime trade and will be more so and the crossroads of tomorrow in terms of shipping routes; alongside “unparalleled fish and energy reserves, which are vital to humanity”, and many “submarine cables through which global information flows”.

Geopolitically, Macron was concerned that “in this large Indo-Pacific space no hegemony settles in the region. And so, to do [counter] that, we have a role to play and partnerships to build”; an implicit reference to China and to French constrainment efforts. Maritime cooperation with India, including substantive exercising and joint logistics agreements was emphasized as “a new movement, a very profound change, this new strategic agenda that we share of engaging with our Indian friends here in the sea”. Such Franco-Indian security convergence, with China tacitly in mind, underpinned this new Indo-Pacific platform.