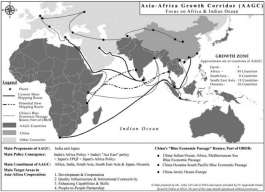 An illustrative map of the AAGC. Source: GIS Lab, IDSA [Behind diplo-mil developments are commercial ones, that have a degree of complementarity and take into account countries still excluded by the Indo-Pacific geometry. Commercial inclusiveness may lead to the demise of opposing architectures. Note of the Editor]

The structural significance is that this first ministerial-level India-Japan Foreign and Defence (2+2) upgrades the officials-level 2+2 format running since 2010. The illustrative significance is that the Joint Statement recorded their “fruitful” discussions “on the regional issues of mutual interests particularly on the security situation in the Indo-Pacific”, an explicit (“particularly”) focus on Indo-Pacific security issues that often revolve around the common challenges posed by China.

The Joint Statement went on that “the two sides had a shared vision of a free, open, inclusive and rules-based Indo-Pacific region”. The term “inclusive” was included alongside the Free and Open Indo-Pacific (FOIP) formulation, originally shaped by Japan and then the United States, so as not to openly antagonize China through explicit containment language. In reality, these India-Japan discussions were critical of Chinese policies in the Indo-Pacific, and reflected their ongoing implicit constrainment approach to China.

Thus, the Joint Statement went on to express their “satisfaction” with the trilateral MALABAR naval exercise between India, Japan and the United States (US), and “welcomed” the recent upgrading of the “Quad” format between Australia, India, Japan and the US from officials-level to ministerial level in September. Both these formats are explicitly Indo-Pacific focussed, and implicitly China-related.

China views India and Japan as external powers that should (like the US, France and the UK) keep out of South China Sea issues. To Beijing’s disquiet, the Joint Statement recorded that the Ministers specifically discussed recent developments in the South China Sea”, on which firstly they “reaffirmed the importance of freedom of navigation and overflight, unimpeded lawful commerce and peaceful resolution of disputes”; and secondly, “with full respect for legal and diplomatic processes in accordance with the universally recognized principles of international law, including those reflected in the United Nations Convention on the Law of the Sea (UNCLOS)”. Both points are China-related, though whether India and Japan are prepared to carry out freedom of navigation exercises in the South China Sea, like the US (that is regrettably out of UNCLOS), remains unclear.

Finally the Joint Statement announced “significant progress” on agreeing an Acquisition and Cross-Servicing Agreement (ACSA). This will strengthen their maritime cooperation in the Indian Ocean, opening up India’s Andaman & Nicobar Islands to the Japanese Navy and Japan’s base at Djibouti to the Indian Navy.