Germany steps into the Indo-Pacific

Germany’s sense of having Indo-Pacific strategic interests is a new trend for 2020, in evidence since August 2019, but anticipated by some German strategic analysts since 2013. 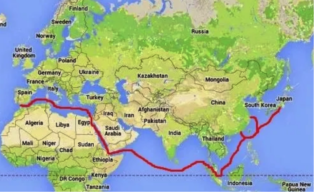 On the 11th of March 2020 the German Navy announced that the Hamburg air defense frigate would deploy for five months from July to December across the Indian Ocean. The Hamburg is scheduled to carry out bilateral exercises with France at Reunion, as well as other naval exercises in Australia and elsewhere with other Indian Ocean partners like India.

On the 10th of February 2020, Germany’s Foreign Affairs minister Heiko Maas held talks with his Indian counterpart, Subrahmanyam Jaishankar, who tweeted “good meeting, discussed Indo-Pacific, multilateralism, connectivity”. Earlier, on the 22nd of January, Jasper Wieck, Germany’s Chargé d’Affaires in India, wrote an Economic Times piece (co-written with his French counterpart), titled “Franco-German tango roots for an open Indo-Pacific”. This followed the Raisina Dialogue speech on the 14th of January by Germany’s Minister of State at the Foreign Ministry, Niels Annen, titled “The Indo-Pacific and Germany: Partners in multilateralism”. He announced “Germany is a stakeholder in the Indo-Pacific”, given “this significance of the Indo-Pacific as a main route for commerce and energy flows”.

Previously, on the 7th of November 2019, Defense minister Annegret Kramp-Karrenbauer warned that:

Germany has developed Indo-Pacific messages with varied partners. Maas told the Bundestag on 24th of October that “we also share Delhi’s interest in maritime security in the Indo‑Pacific region”. The Germany-France Council of Ministers meeting on the 19th of October agreed on “developing a European strategy for the Indo-Pacific”.

Germany, alongside France and the UK in the E3 setting, called for China to comply with Permanent Court of Arbitration rulings against it on the South China Sea, and for “freedom and rights of navigation in and overflight above the South China Sea”. Germany’s ambassador to Australia, Thomas Fitschen, announced on the 28th of August that “our strategic partnership has gained clout in the Indo-Pacific”. The first current German use of the term “Indo-Pacific” was on the 24th of August 2019 at the Germany-Japan summit, where Angela Merkel and Shinzo Abe agreed “cooperation” over a “free and open Indo-Pacific”.

Almost a century ago, Karl Haushoffer coined the Indopazifischen Raum “Indo-Pacific region” as a geopolitical concept. Germany now is stepping out into the Indo-Pacific as a political and military actor.