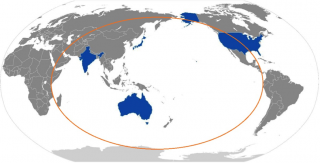 The area of interest (AoI) of the Quadrilateral Dialogue

On the 26th of September 2019 Australia’s Foreign Minister Marise Payne, India’s Foreign Minister Subrahmanyam Jaishankar, Japan’s Foreign Minister Toshimitsu Motegi and the US Secretary of State Mike Pompeo met in New York for the quadrilateral (“Quad”) dialogue between Australia, India, Japan and the United State. Two features are significant; namely, the new level of engagement and the explicit/implicit nuances of their agreed Statement. Both features demonstrate Indo-Pacific strategic geometry in play, and reflect tacit responses to China’s increasing presence across the Indo-Pacific.

The first significance is structural. The Quad had fleetingly emerged in April 2007 at Joint Secretary officials-level; though following a demarche (note of complaint) by China, and hesitations by Australia and India, the format lapsed. It was then revived a decade later; with explicit Indo-Pacific rhetoric and concerns about the South China Sea evident in their official releases in November 2017, June 2018, November 2018 and May 2019. A fleeting 15 minutes heads of government meeting was held in June 2019, which lent the quadrilateral format continuing legitimation. This 60 minutes meeting between foreign ministers indicated a structural advancement of the format from officials-level to ministerial-level. The ministerial-level format is now established, their agreed statement “pledged to continue Indo-Pacific coordination” with another meeting pencilled in for November 2019.

The second significance is the explicit and implicit substance of their discussions. Three points can be pinpointed in their agreed statement.

First: their statement that “the four countries discussed collective efforts to advance a free, open, prosperous, and inclusive Indo-Pacific”. This reflects India’s continuing stress on the “inclusive” tag, to put alongside the original Japanese and US formulation of a “free and open Indo-Pacific” (FOIP). The inclusion of the “inclusive” tag reflects a continuing Indian reluctance to be shown to be overtly and explicitly balancing against China, even if tacit and implicit constrainment is apparent.

Second: their statement on “close cooperation on maritime security” is ironic since the United States, Japan and India began their annual Malabar exercises in the Western Pacific on the 26th of September, the same day as the Quad ministerial meeting. Australia had sought participation in these trilateral exercises, but so far has been blocked by Indian hesitations, with China in mind. Australian participation now seems likely to move forward at a quadrilateral level.

Third: their agreement on the need for “quality infrastructure and connectivity” in “support of preserving and promoting a rules-based order in the region”. Both are China-related concerns. The former with reference to combating China’s Maritime Silk Road (MSR) and the latter with regard to combating China’s push in the South China Sea.