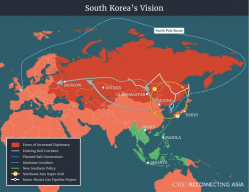 South Korea has finally moved to give some support to the US Indo-Pacific strategy. A Free and Open Indo-Pacific (FOIP) goal was enunciated by the US in Autumn 2017, following its coining by Japan in autumn 2016, but South Korea kept some distance. President Trump’s suggestion in November 2017 that South Korea sign up to the FOIP initiative was quietly rebuffed by South Korea which viewed Japanese involvement with coolness. However, South Korea has for the first time lent the US Indo-Pacific strategy some support. This was shown as President Moon visited the US and stated in his Joint Press Conference on 30 June 2019 that “under the regional cooperation principles of openness, inclusiveness and transparency, we have agreed to put forth harmonious cooperation between Korea’s New Southern Policy and the United States’ Indo-Pacific Strategy”.

The New Southern Policy (NSP) was announced in 2017; an implicit Indo-Pacific framework for closer political and economic relations with Southeast Asia (especially Indonesia) and South Asia (especially India). In such vein, South Korea became a dialogue partner of the Indian Ocean Rim Association (IORA) in December 2018. As such, South Korea welcomed Indonesia’s Indo-Pacific Cooperation Concept (IPCC) enunciated in 2018, and the ASEAN Outlook on the Indo-Pacific (AOIP) announced in June 2019. Low key discussions were held between South Korean and US officials in December 2018, at their third Senior Economic Dialogue (SED) meeting, on South Korean partnership involvement in US Indo-Pacific infrastructure initiatives.

An implicit sign of South Korea’s greater security cooperation with the US Indo-Pacific strategy was South Korea’s decision to participate in the newly setup Pacific Vanguard naval exercises held from May-June 2019. This saw a South Korean destroyer, the ROKS Wang Geon, carrying out drills in the Southwest Pacific with US, Australian, and Japanese ships. The US Navy gave it explicit Indo-Pacific rationale. Fleet commander Vice Admiral Sawyer stated that “Pacific Vanguard joins forces from four, like-minded maritime nations that provide security throughout the Indo-Pacific based on shared values and common interests“.

South Korea’s convergence with US Indo-Pacific strategy is discernible, but still hesitant. Continuing bilateral friction with Japan is one factor. South Korea’s desire not to antagonise China is another factor, the more so as China is to some extent a useful counterweight against Japan for South Korea. The priority of dealing with North Korea remains a factor diminishing the relative importance of the Indo-Pacific in South Korea’s foreign and defence policy. Nevertheless, South Korea’s economic outreach under the New Southern Policy (NSP) is apparent, and with it particularly stronger relations with India. Also apparent is a political and security shift towards giving some support now to the US Free and Open Indo-Pacific (FOIP) proposals.