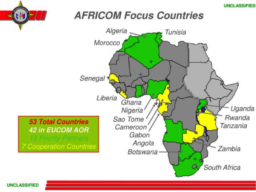 Source: US EUCOM. In green the 10 priority countries.

The dangerous escalation in Libya is increasing the instability in the region, pushing neighbouring countries to choose sides between the two main fronts facing each other in the war-torn country. Tunisia, which has so far maintained a delicate balancing act, still represents a question mark. Its proclaimed neutrality did not spare the country, currently a non-permanent member of the UN Security Council, from the regional turbulences stemming from the Libyan conflict. On the contrary, foreign interferences are amplifying political tensions at home.

The visit of President Kais Saied to Paris on the 22-23rd of June highlighted the mounting pressures on Tunis. Paris pledged support to its former colony, announcing a new €350 million loan (part of a €1,7 billion package for 2016-2022) for health, education and employment. However, the joint press conference of Saied’s first visit to Europe was dominated by French President Emmanuel Macron’s charges against Turkey, accused of playing a ‘dangerous game’ in the Mediterranean Sea.

Macron referred to the recent incident involving the French frigate Courbet (part of the NATO’s Operation Sea Guardian) and three Turkish warships, that were suspected of escorting an arms shipment to conflict-torn Libya. The incident, that is being investigated by NATO, highlighted the deepening rift between France (considered close to General Khalifa Haftar in Libya) and Turkey, whose military support to the Government of National Accord (GNA) helped turn the tide, forcing Haftar’s Libyan National Army (LNA) to end its offensive on Tripoli and retreat from the city.

During the press conference, Saied reiterated Tunisia’s support for the UN-sponsored GNA but also reminded the public of the transitional nature of the government in Tripoli, saying that its legitimacy must be renewed. This ambiguous response (presumably suggesting a change in the leadership of the GNA, which, together with Haftar’s recent setback, would help ending the toxic hyper-personalisation of Libyan politics) reflects the stiffer political debate in Tunisia, where the position of the post-Islamist leading party Ennahda is increasingly under scrutiny. In particular, the ‘parallel diplomacy’ of the parliament speaker and long-time Ennahda leader Rachid Ghannouchi was put into question for its uncritical support to Turkey’s policies in the region.

Tensions between Ennahda and opposition parties are expected to increase further in the short-medium term, especially if Tunisia would continue to be perceived as a logistic hub for Ankara. The use of the Zarzis airport in southern Tunisia (near the island of Djerba, with a single runway) to deliver Turkish medical aid to Libya in May has been met with concerns in several political milieus, but foreign interference is only likely to increase if the conflict in Libya goes on, drawing in major powers.

In this context, the US Africa Command (AFRICOM)’s statement in late May about its readiness to provide support and military training to Tunisia is another case in point. A response to Russia’s increasing activism in Libya, the statement confirms the strategic position of Tunisia, an important regional partner for Washington, whose democratic experiment must be shielded from ‘malign actors and terrorist networks’.

Umberto Profazio – Maghreb Analyst for the NATO Defense College Foundation, he was previously Libya Analyst for the Conflict, Security and Development Programme at the IISS and regularly publishes on issues such as political developments, security and terrorism in the Middle East and North Africa region.

Vaccine diplomacy gives China a foothold in the Maghreb

AFRICOM cements its strategy in the Maghreb