In the run-up to the 2016 NATO Summit in Warsaw, the German Marshall Fund of the United States (GMF) is partnering with the NATO Public Diplomacy Division by bringing together a senior-level panel of officials and experts. The aim of the Advisory Panel is to formulate recommendations around themes that will be high on the agenda of the NATO Summit in 2016.
The Panel will analyze and identify policy solutions for pressing issues, including collective defense, defense investment and innovation, enlargement and partnerships, the future of the transatlantic relationship, and the new security environment.
Over the course of the fall, the Panel will convene four times in different key allied cities – Berlin, Rome, Washington DC and Warsaw – in order to engage in off-the-record roundtable conversations with local policy makers and opinion shapers.
These events will typically last half a day or less and welcome approximately 25 to 35 participants for maximum intellectual exchange. Following these discussions the Advisory Panel will contribute to a major publication, which will summarize their findings and formulate recommendations in advance of the NATO Summit in 2016. The report will be released in March 2016.

Members of the Advisory Panel

Rapporteurs of the Advisory Panel 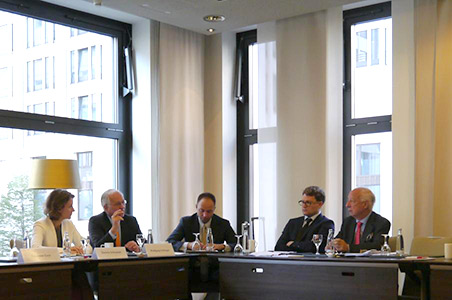