Australia and India converge over the Indo-Pacific 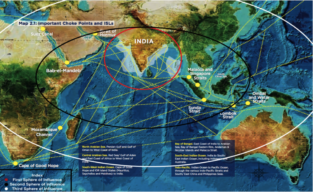 In the India-Australia Electronic Summit on the 4th of June, the Joint Statement on a Comprehensive Strategic Partnership revealed that the 2009 “strategic partnership” has been upgraded to a broader “Comprehensive Strategic Partnership”. Economic and security engagement is being ramped up, with pledges to work more actively together in the Indian and Pacific Oceans. India welcomed Australia’s Pacific Step-up, and Australia welcomed India’s Indo-Pacific Oceans Initiative (IPOI).

Much of the context and driver for the Summit were their shared concerns about China (e.g. South China Sea, naval and economic expansion in the Indo-Pacific, Huawei, Covid-19); for India, further magnified by the Himalayan border frictions with China in May and June. The two leaders agreed:

Both India and Australia share a vision of a free, open, inclusive and rules-based Indo-Pacific region to support the freedom of navigation, over-flight and peaceful and cooperative use of the seas by adherence of all nations to international law including the United Nations Convention on the Law of the Sea (UNCLOS).

This was a deliberate implicit criticism of China’s push in the South China Sea.

The Indian-Australian Joint Declaration on a Shared Vision for Maritime Cooperation in the Indo-Pacific, a first such “Indo-Pacific” declaration between them, stressed environmental cooperation and pledged to “deepen navy-to-navy cooperation”. India will probably no longer oppose Australia’s participation in the Malabar naval exercises between India, Japan and the United States.

Another new development was India and Australia’s Military Logistics Support Agreement (MLSA). This opens access to military bases in the Eastern Indian Ocean – for India’s use of Australia’s Christmas Island and Cocos Island, as well as Darwin; and for Australia’s use of India’s Andaman and Nicobar Islands.

Finally, revealing wider patterns were pinpointed in their Joint Statement:

China’s absence in this listing reflects emerging patterns of strategic geometry as Australia, India, as well as Indonesia, Japan, New Zealand, South Korea, Vietnam and the United States continue to move closer together.

David Scott (Dr.) – is a prolific author on the Indo-Pacific, China and India; an associate member of the Corbett Centre for Maritime Policy Studies, and a member of the Center for International Maritime Security (CIMSEC).