China trying to use Covid-19 to its advantage in the Indo-Pacific? 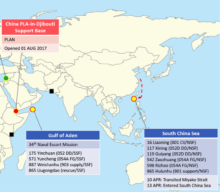 China is using Covid-19 disruption to assert itself over what it considers “core interests” in the Indo-Pacific: namely Hong Kong, Taiwan and the South China Sea. Some counteraction by other powers is apparent.

Firstly, in Hong Kong, on the 18th of April, around a dozen pro-democracy activists and lawmakers were arrested, the largest single-day round-up in years. These included Martin Lee, the 81-year-old founder of Hong Kong’s opposition Democratic Party. On the 6th of May, China’s Hong Kong and Macao Affairs Office said the central government in Beijing would not rest until this “political virus” represented by the pro-democracy movement was “eradicated”.

China also flexed its muscles around Taiwan and in the South China Sea. This met immediate criticism from the US government; but also from Indian commentators.

At India’s Observer Research Foundation, Rajeswari Rajagopalan penned a piece on the 11th of April titled, “The danger of China’s maritime aggression amid COVID-19”. Similarly, Commodore Jai Singh penned a piece in the Financial Express on the 1st of May titled “China’s maritime aggression and options for India”. With regards to India, its government slapped restrictions on post-COVID-19 investment takeovers on April 17th against countries that “share a land border” with India, in other words, China. Along that disputed Himalayan land border, skirmishes between Chinese and Indian troops were reported on the 11th of May, simultaneously with air friction in Ladakh.

Secondly, China exerted further pressure against Taiwan. On the 11th of April, the aircraft carrier Liaoning (accompanied by two guided-missile destroyers, two multi-role warships and one supply-class fast combat support ship) passed through Japan’s Ryukyu chain to go down the eastern coastline of Taiwan. It is significant that the US increased its own deployments in the Taiwan Strait; guided-missile destroyer USS Barry being sent through twice on the 10th and 24th of April.

Thirdly, China exerted itself in the South China Sea in spring 2020. Initially this was against Vietnam, then the Philippines and then Malaysia. This was followed (at a time when US aircraft carriers were restricted in base at Guam and Tokyo through Covid-19 outbreaks) by China’s dispatch of its aircraft carrier group into the South China Sea for active exercising in mid-April. Chinese naval aircraft were also deployed to Fiery Cross Reef on the 11th of May.

However, other Pacific powers responded. A powerful US flotilla (USS America, an amphibious assault carrier, equipped with F-35B multirole stealth fighters; USS Barry, a guided missile destroyer, and USS Bunker Hill, a guided missile cruiser) was deployed to the South China Sea during April. The USS Barry carried out Freedom of Navigation operations around the Paracels. The USS Bunker Hill was, significantly, joined by Australia’s HMS Parammata to lend support to the beleaguered Malaysian drill ship the West Capella, as was USS Montgomery on the 7th of May. Such US and Australian activities were denounced by China’s Foreign Ministry and its state media.

In any case, be these Chinese deployments a surge or a planned routine, they demonstrate will and capability of a persistent naval presence.

David Scott (Dr.) – is a prolific author on the Indo-Pacific, China and India; an associate member of the Corbett Centre for Maritime Policy Studies, and a member of the Center for International Maritime Security (CIMSEC).