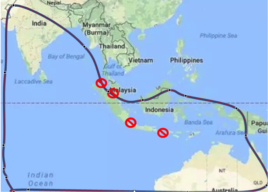 The format is located near four important Indo-Pacific choke points

The strategic trend in Indo-Pacific security has been the movement away from just a US “hub and spoke” bilateral alliances system, to variable geometry and cross-bracing partnerships between various countries. The Australia-India-Indonesia (AII) format illustrates this in recent months.

Fifthly and finally was, President Jokowi’s trip to Australia, including his speech to the Australian parliament. In the Joint Statement made with the Australia Prime Minister on the 10th of February, in a section devoted to “Maritime Cooperation” China was in the frame of their discussions:

Leaders expressed serious concerns about developments in the South China Sea, including the continued militarisation of disputed features, and reaffirmed the importance of maintaining peace, security, stability, and freedom of navigation and overflight in the region. They called for disputes to be resolved peacefully in accordance with international law, particularly the United Nations Convention on the Law of the Sea (UNCLOS) 1982.