If Western Balkans are to achieve stability and sustainable economic progress, we must support the development of a strong civil society. The transformation from the Socialist and authoritarian regimes of last century to mature liberal democracies is not yet completed in the region. To strengthen the positive developments and prevent backsliding, the checks and balances must be reinforced and supported. Civil society is having a vital role in moving the transformation forward.

Civil society is the foundation of democracy. As both a source of legitimacy and a counterbalance to public power, it protects the freedoms we take for granted. In the Western Balkans, its role will be decisive. Liberal democracy and the rule of law are still in their phase of consolidation in the region. More than 30 years have passed since the fall of the Berlin wall, but liberal democracy and the rule of law are as dependent on the political culture of civil society as of public institutions and legal texts. Polls taken on the Western Balkans indicate an engaged public, demanding more democracy and accountability, voicing frustrations with corruption and ruling elites that often seems more interested in obtaining and keeping levers of power than in changing society for the better.

While some go for the easy solution of joining “the system” through government party membership or bribes, some leave looking for a better life in Western Europe, many join forces to change “the system”, believe it is their power to improve.
If we look at the vitality of civil society in the WB6, we find comfort. Looking at the numbers published by the Balkan Civil Society Development Network (BCSDN), there were more than 90.000 organisations, foundations and endowments in the WB6 in 2019, a 5% increase since the year before.

Although some elections have shown the importance of civil society engagement for change, change cannot only be seen in the prism of support for opposition parties, their electoral success or change of government. Distrust of opposition parties, as experience shows that, when gaining power, former opposition parties have been quick in learning the ways of their predecessors, is most probably stronger in Western Balkans than generally in Europe.
That being said, all over Europe “single cause” activism is having a stronger pull on the young electorate than traditional political or professional organisations. Activism for environmental issues, anti-corruption, human rights and sometimes very specific local issues are however often a gateway for a broader engagement. Perhaps more important, it is also a school of political participation and democracy. Support of civil society is thus important.
The challenge is to ensure that every citizen feel sufficiently secure and well informed to take an active part in forming their societies, follow their conscience and convictions without fearing for their jobs, harassment or other forms social pressure.

Through fostering civil society in a regional programme, we must seek to support cooperation and mutual support between civil society in the different countries of the region to reduce the temptation – also in parts of civil society – of focusing on national victimhood and nationalism, easily manipulated passions that have wreaked havoc in the region far too often in the 20th century.

We must however be consistent in our support of freedom and democracy. If we only support organisations that agrees with us 100%, we undermine the very values we want to strengthen. We must support a diversity of opinions. Our condition for support must be adherence to the basic tenets of freedom, rule of law and democracy.

The engagement of committed citizens is the best guarantee for democracy and freedom. The transatlantic community must therefore invest not only funds, but also political and economic willpower into support of civil society.

Several NATO countries engage in programmes supporting civil society organisations in the WB6. One of the most successful is the Balkan Trust for Democracy, a Euro-Atlantic public-private initiative estab lished in 2003 by the German Marshall Fund of the United States.
Thirty years after the fall of the Berlin Wall and the disintegration of Yugoslavia, we cannot let civil society in the Western Balkan countries adrift. If we do, the region risks backsliding to inward-looking nationalism and populist authoritarianism. The peoples of the Western Balkan cannot afford this, but neither can the rest of Europe. 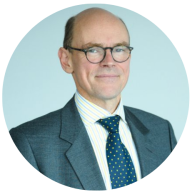 Born in 1965, he joined the Ministry of Foreign Affairs after graduating from the University of Oslo in 1990. He has served in Ankara, Rabat, Paris, London and most recently as ambassador in Belgrade (2015-19). In Oslo, he has i.a. held positions as secretary to the Government Security Committee and Inspector General of the Foreign Service 2013-15.