For two decades NATO has been successfully involved into stopping a terrible conflict in former Yugoslavia as an immediate task and then in stabilising the region directly or indirectly, pending the different accessions to NATO and/or EU membership by the six countries of the Western Balkans.

Despite all the concrete difficulties, the involvement of KFOR (Kosovo Force) has been, in collaboration with other international actors and institutions, a clear success. Only two countries are still not part of the Euro-Atlantic community and only two are not yet candidates to the EU membership.

A clear indicator of how the area has been stabilised is the drastic drop of KFOR’s numbers from 55.000 soldiers during the first stages of pacification to just 3.672 and the constant manning of EUFOR (European Force in Bosnia and Herzegovina) around 600 units. The situation may be still fragile, but the tensions have shown to be more at a political level than violent ones.
In the meantime, the strategic environment of the Balkans has considerably changed because the region is now considered not just limited to the Balkan Six, but encompassing the traditional area from the Adriatic to the Aegean and the Black Sea.

This was first due to the end of a compartmentalised political and strategic view that arbitrarily separated the former Yugoslav territories from what was considered either Central (Slovenia, Croatia), East (Romania, Bulgaria, Moldova) or South Europe (Greece and Turkey).

Geopolitics for centuries have seen this area disputed by Central and Eastern European powers (Austria-Hungary and Russia) or Southern European ones (Ottomans). The temporary prospect of reasonably sustained enlargement of Europe had effectively driven the perception locally and in the European capitals that this region was apart, precisely because it was going to integrated in the rest of the Euro-Atlantic family. Two successive five-year delays, the ensuing delusion and the return of great power competition have again recreated a vast Balkan arena dangerously bordering a split Ukraine and a restless Caucasus. If Europe and NATO want to close definitively this thorny dossier, they have to resolve the matter not at the margins but in its centre of gravity that is made by Serbia and Kosovo.

Serbia has been the historical unifier of Yugoslavia and Kosovo, right or wrong, has been considered an essential ingredient of the Serbian political set up. Despite considerable change, the Serbian elite is still in denial of its defeat, very much like Germany after the I WW. Kosovo on its side is still in denial of a brutal covert civil war that drastically reduced for a very long period any meaningful alternance in power. This has allowed both elites to be rentiers of the division and the political tensions, profiting from the substantial aid of the international community, European Union especially, and sustaining each other in their reciprocal vetoes.

The biggest potential for change, as I could personally witness in the country during my tenure as Chief Political Advisor of the KFOR, was not in Serbia, but in Pristina because there is a predominance of young people who at least since five years have realised that change is their biggest alternative to illegal emigration. And elections have twice shown this trend.

A new government, much less tainted by past political killings, corruption and organised crime networks, has much more interest and drive to break with past stalemates, despite some ideological rigidities. One of the key stakes is the treatment of minorities, especially Serbian ones. While all minorities enjoy a solid constitutional and parliamentary protection, Serbian-speaking Kosovars still feel that they are not really considered by Pristina on par as the Albanian-speaking majority.

They still remember the ugly scars of the destructive 2004 disorders and most pensions or salaries are paid directly by Belgrade. If Kosovo transforms its traditional stance towards Serbian-speaking Kosovars, it will achieve three main goals: increase its chances of international recognition (including the critical 5-4 EU/NATO non recognisers) because the ethnic issue will be put out of the debate; consolidate its national identity since a minority-friendly state reduces the scope for internal divisive debates or political ghettoes and drastically stifle the temptation of Belgrade to manipulate Kosovo through ethnic channels.

This is not a problem of security, sovereignty, land-swaps or excruciating technical talks while waiting the Godot of a political solution, it is the issue of a state that is perceived as reasonably impartial and helpful vis-à-vis all citizens. Concretely Pristina should assume all the costs and pensions of all Serbian-speaking Kosovars and grant the Association/Community of Serbian-speaking municipalities with appropriate rules. It is the Kosovar national Marshal Plan to protect its own citizens from lingering Pan-Serbism.
If the new government will overcome outdate distrusts stemming from previous Bosnian experiences on similar mayoral associations, it will unhinge the ethnical discourse that still is present in Belgrade and start to normalize where it is immediately possible, at home by one’s own means. Until Serbia can somehow claim that she is the only assistant and protector of Serbian-speaking Kosovars, the Belgrade-Pristina Dialogue will continue to be less than convincing and Serbia will delay as much as possible internal change. And while international transitional justice may try to put to rest past offences and grievances, offering a different condition to Serbian-speaking Kosovars is about a vastly different future. 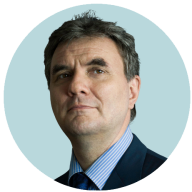 Is Director of the NATO Defense College Foundation. A specialist in political and strategic affairs, he has worked with different top decision makers in Italy and abroad both in public institutions and private companies. He teaches geopolitics, geo-economics and intelligence at the Italian MFA-affiliated SIOI School.