The political and economic logic that underpins the European Union applies equally to the Western Balkans. Economically the region is already very closely linked to the European Union. 68% of its trade is with the EU and 65% of its Foreign Direct Investment stock has come from EU companies.

It is the tragedy of the Western Balkans that the region was falling apart, torn by civil war and bloody conflicts at the time when the majority of Central and Eastern European states were preparing for EU membership. By the end of the 1990s, the Western Balkans faced a triple transition – not only from a centrally planned economic model to a market economy, and from authoritarianism to democracy, but also from war to peace. In this context, the EU made a promise at the Thessaloniki Summit in 2003: the promise that the whole region could join our European Union. This promise is still alive, but it is taking longer to fulfil it than anyone expected.

In the past decades, we have often faced challenges on both sides that undermined the credibility of our promise. While the European perspective of the region has helped our partners to achieve political and economic reforms with improved democratic processes, stronger rule of law and better governance, those reforms often remained slow and old elites clung on to power. This led some to question the transformative power of the enlargement process. On the other hand, also the EU sometimes failed to respond when partners delivered on reform commitments.

To address those challenges and to speed up the accession process, the Commission has recently upgraded its toolset. We revised our enlargement methodology, setting up a more dynamic, credible and balanced approach to accession, while putting an even stronger focus on fundamentals such as the rule of law and democracy. And we underpinned this with substantial support for the region’s economic convergence with the EU. In the coming years, we will be bringing close to €30 billion of investment to the region: to build and upgrade sustainable transport and energy infrastructure; to support the region’s convergence to the EU and addressing the great economic challenges of our time (the green and digital transition) and to invest in innovation and in the region’s youth. Our goal is to treat our partners like Member States in as many areas as possible and to give them access to some benefits of EU membership, such as access to the EU single market, ahead of accession, as soon as they fulfil the criteria. This will help the accession process, boost growth potential for local businesses and improve the lives of citizens.

We are also stepping up our engagement on security. Our focus is on better law enforcement and cooperation with EU agencies such as EUROPOL, FRONTEX and EUROJUST in tackling security threats such as organised crime, arms and drug trafficking, or money laundering. The COVID-19 crisis has further exacerbated security challenges and exposed the vulnerabilities of our societies to cyber-attacks, cybercrime and hybrid threats. Disinformation and misinformation have been booming and the Western Balkans have not been spared by these phenomena. State and non-state actors play a strong part in disseminating disinformation and pushing their narratives. The risk is that political processes could be hampered, letting destabilisation kick in.

Responding to these threats demands robust, comprehensive and joint responses. Over the past years, the EU and NATO have stepped up their cooperation to support the stability and the Euro-Atlantic orientation of the region. We have coordinated our capacity-building activities and our messages towards the region. The EU’s commitment is key as our partners in the Western Balkans engage in the difficult reforms that are needed to transform their societies, to find compromises to end long-lasting disputes and to turn away from an often painful legacy of the past and towards their future within our European Union. 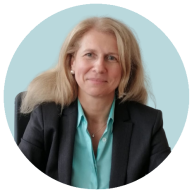 She is Acting Director for the Western Balkans and Head of the Albania, Bosnia and Herzegovina Unit in the Directorate General for Neighbourhood and Enlargement negotiations of the European Commission. She was previously member of the Cabinet of the Commissioner for Enlargement and Neighbourhood Policy (2012-2014), after having worked on the EU accession negotiations with Croatia (2009-2012) and Romania (2003-2005), as well on the negotiations for the Stabilisation and Association Agreement with Bosnia and Herzegovina (2005-2006).