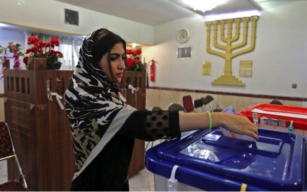 The Trump administration’s decision two years ago to abandon the 2015 Iran nuclear deal has put the region back on the confrontational footing of ten years ago. It has become clear by now that the larger aim of the administration in withdrawing from the deal and of recognizing Jerusalem as the capital of Israel was to irreversibly destroy any hope of returning to the pre-Trump era, regardless of whether the Democrats win the White House in November. These dire circumstances make a negotiated outcome to the Iranian crisis ever more remote. The only hope is an “out of the box” solution.

The visceral hostility between Israel and Iran first needs to be addressed. This hostility is by no means atavistic. Relations between Jewish and Persian people go back to biblical times; for over two millennia a Jewish community thrived in Persia. It was not always a perfect situation, but it did not compare to the persecution Jews suffered in Europe.

Iran, along with Turkey and Israel belong to the few non-Arab countries in the region. At the time of the Shah, Iran was an exception among Muslim states in having recognized the Jewish state and established diplomatic relations with Israel, maintaining a close collaboration including co-operation in the military field.

After the Islamic Revolution took power in 1979, it wasted no time in reversing the policies of the Shah on Israel, and ceased to recognize it as a legitimate state, calling it by the derogatory term of “Zionist entity”. In any case the Jewish community is officially recognised by the government and one seat is reserved to it in the Iranian Parliament (Majlis).

That opened a long season of deep hostility. To explain it, the Iranians invoke Israel’s unfair treatment of the Palestinian people. This appears an improbable motivation. Why should the leading Shiite country support with greater ardour than most Arab states, the cause of the Palestinians, who are mostly Arabs and Sunnis? Strategic reasons prevail: despite being a large country with more than 80 million inhabitants, Iran cannot compete militarily with Israel, an infinitely smaller country that has acquired a formidable military capability including the undeclared possession of nuclear weapons. Through its support to the Palestinian cause, the Shiite Hezbollah militias in Lebanon, Hamas in Gaza and the Alawite regime in Syria, Iran can count on strategic partners who have become painful thorns in the Northern, Eastern and Southern flanks of Israel.

It is hardly credible that Iran would embark on an ambitious civilian nuclear program without considering its military potentialities. Like other states having undertaken the costly and controversial path of enriching uranium or producing plutonium, Iran must have had such an option at least in the back of its mind. But, unlike the DPRK, Iran remains party to the Nuclear Non Proliferation Treaty and through the JCPOA arrangement, accepted to subject its nuclear program to unprecedented controls and limitations of which Israel is in fact the main beneficiary. The JCPOA even led to a normalization between sworn enemies such as the United States and Iran.

Exceptional situations require exceptional measures. At this stage, a gesture of great courage and leadership, as was President Anwar al Sadat’s historic visit to Jerusalem in 1977, would be necessary to avoid a tragic confrontation. Sadat’s visit took place a few years after the bloody Yom Kippur war in 1973 and was instrumental in placing relations between Israel and Egypt on a new peaceful track. Leaders in power in the two countries and the international community cannot wait for a trauma like the Yom Kippur war to launch a reconciliation offensive between Israel and Iran, one which requires more guts than a military offensive.

Carlo Trezza was Italy’s ambassador for Disarmament in Geneva and chaired the Conference on Disarmament, the UN secretary general’s Advisory Board on Disarmament Affairs and the Missile Technology Control Regime.