The Arab Risings (more colloquially called Arab Springs) that unfolded in 2011 and their avatars in 2018-2021, named also Arab Summer, were a wave of protests, revolts, rebellions and revolutions that touched practically every country from the Atlantic till the Persian/Arab Gulf. In their un-coordinated development and mixed outcomes, they resemble very much the revolutions of 1848 that swept across Europe.

Their structural causes are a dangerous mix between: demographic explosion, youth education and unemployment, hardships imposed by structural adjustment programmes by WB and IMF (rising prices of first necessity goods and steeper inequality), consequent middle-class frustration and the breakdown of the social contract by authoritarian regimes (political acquiescence by the ruled people in exchange of subsidized goods and jobs).
This political and social gap made populations intolerant to pre-existing autocracy and corruption, spurring to ask forcefully in essence for dignity.

These factors were multiplied by the social media information diffusion and the imitation effect spawned by different demonstrations; initial heavy-handed reactions by the regimes further inflamed the situation. In the background the action or inaction of armed forces was a crucial element for the success, failure or descent into civil war of the risings.

The first protests started in Tunisia by December 2010, bringing to an end the consolidated dictatorship Zine al-Abidine Ben Ali by February 2011 after the skilful media exploitation of the suicide of a street vendor. Contrary to what happened during the Cold War, the protests were quickly broadcast through mobile phone networks and social networks.

By the end of that month, protests erupted against corruption and autocracies and for political freedom in Libya, Egypt, Israel, Yemen, Bahrein, Kuwait, Iraq and Iran. The protesters, venting a long-repressed anger against the establishment, organised in several cities what were called the “Days of Rage”. The Egyptian rais Hosni Mubarak had to relinquish power.

In March 2011 people were demonstrating also in Morocco, Lebanon, Jordan, Syria, Saudi Arabia and Oman, while one month later the twin civil wars in Libya and Syria were becoming a permanent feature of the region for the years to come.

By the end of 2011 also the government in Yemen changed, even if large sectors of the country were fearing the risk of yet another civil war. Three years later, in fact, the risk became reality, while Iraq and Syria were partly occupied by the self-styled Caliphate and in Egypt a military coup, followed by elections, changed the local government again.

The second wave of demonstrations touched particularly Algeria (previously not involved in the movements) and Sudan, where another government was forced to quit (2019).
The end results have been rather diverse with three countries plunging into civil war (Libya, Syria, Yemen), seven witnessing protracted unrests (Iraq, Lebanon, Egypt, Palestine, Algeria, Jordan, Sudan), Tunisia with an embattled democracy and the rest trying to reform by different degrees. in order to defuse further tensions. The dry conclusion is that, while the balances and borders that were generated by the Sykes-Picot Agreement (1916) and the Balfour Declaration (1920) are still visible, the changed social underpinnings make most of the surviving political structures simply unsustainable.

Strategically one can witness a relative and probably persistent decline of influence by major external actors in favour of opportunistic coalitions vying for power in the Gulf, the Levant and North Africa, that must be considered as three very distinct regions in lieu of an all-encompassing misleading Middle East concept. Energy importing countries across the Mediterranean will still continue to be interested in the security of supply for their industries (no matter if fossil or renewable), but cannot taken for granted neither their old alliances with existing elites nor the traditional assistance programmes that propped up those elites. Just the presence of relatively new actors like Beijing or returning ones like Russia, is a strong incentive to find new convincing instruments of collaboration with partner countries.

China, India, Japan, South Korea, Australia and the USA have also their NATO Defense College Foundation 15 Beyond the Arab risings: what kind of future? interest in the area, but have different stakes according to their energy suppliers’ portfolio. UN consensus remains very difficult to achieve in this situation.

In this context NATO, while pursuing a necessarily more structured collaboration with the EU, has to invest seriously in its existing partnerships firstly because these countries belong to the immediate neighbourhood of the European Allies; secondly because Russia’s presence has quickly extended towards Syria and Libya, instead of seeking improbable successes on the Baltic (which is different from supporting Minsk in case of necessity) and thirdly because any sensible cooperative security endeavour in the Indo-Pacific need safe lines of communication across the strategic choke-points of Suez, Bab el Mandeb and Hormuz. 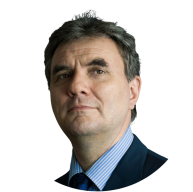 is Director of the NATO Defense College Foundation. A specialist in political and strategic affairs, he has worked with different top decision makers in Italy and abroad both in public institutions and private companies. He teaches geopolitics, geo-economics and intelligence at the Italian MFA-affiliated SIOI School.